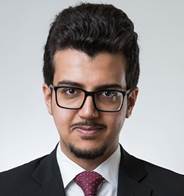 Mohammed graduated from College of Medicine of University of Dammam with honors as the top of his class. He has since been working as a demonstrator in the department of Neurosurgery in King Fahad University Hospital. He finished a degree in Neuroscience in King’s College London in United Kingdom with a project in multimodal monitoring of traumatic brain injury focusing on the electrophysiological and chemical profiling of spreading depolarization in secondary brain injury. Mohammed is interested in research and was involved in many projects including clinical trials in spinal cord injury and studies in neurosimulation that led him to present in international conferences like the American Association of Neurological Surgeons (AANS) Annual Scientific Meeting and the Canadian Neurological Sciences Federation (CNSF) Congress and got the award of the Saudi International Stereotactic and Functional Neurosurgery Conference-2014. He has undergone many Neurosurgery clinical electives and observerships in University of Toronto, McGill University, and University of Alberta which cemented his interest in Neurosurgery. In his spare time, Mohammed is interested in photography and scuba diving.